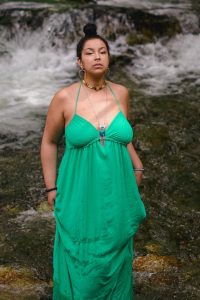 Mamarudegyal MTHC (Diana Hellson) is a Canadian Hip Hop and R&B Artist.Diana Hellson was born January 11, 1992 in Calgary, Alberta. Starting as young as three years old, Diana has been naturally drawn to the stage and has spent her lifetime performing through Dance, Theatre and Music. In 2012, Diana was given the name “Mamarudegyal MTHC” by her Calgary KRUMP family Empirical Freedom and began her journey as a Hip Hop and R&B Artist thusly.

Moving to Vancouver, BC in 2014, Diana AKA Mamarudegyal MTHC quickly became an in demand artist and mainstay on the Hip Hop Scene. Joining forces with Coast Salish duo “Status Krew” in 2015, Diana started Indigenous Hip Hop and Multimedia group Rudegang Entertainment. Releasing her debut EP “MRG EP” in 2016, and taking home two Fraser Valley Music Awards (Best Hip Hop – Female, Queer Excellence in Music) in 2017, Mamarudegyal MTHC has made quite a name for herself and has the BC Hip Hop scene waiting impatiently for her follow up album, currently in progress.