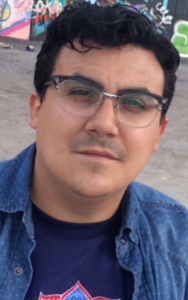 Bio: Jay Havens holds a Bachelor of Fine Art from the University of British Columbia (2008) and a Master of Fine Art from Emily Carr University of Art + Design (2016). He works at creating projects of contemporary art, mural making and scenography (stage design and production) with a focus to decolonize both himself and the audiences his work encounters. He also works in educational roles as artist in residence and instructor for school districts and universities. Jay is an artist of Haudenosaunee-Mohawk and Scottish-Canadian ancestry and a proud member belonging to the Six Nations of the Grand River, Mohawk Bear Clan. For the past 26 years he has lived in Sto:lo, Musqueam and Haida Territories. He currently splits his time between Salish Territories in British Columbia and Haudenosaunee Territories in modern day Ontario and New York State.

Statement: There was a time when Indigenous culture was self-supporting using resources from the land, “Everything we needed was already in front of us.” This sentiment remains true in the bargain hunter only the resources and environment have changed. I use repurposed and reclaimed elements from consumer landscapes as the raw materials which make up a larger series of work I call #rollbackrawhide. The bargain hunter is a human size cornhusk doll which questions notions of Indigenous material culture, trade relations, commercialization and urbanization of peoples, practices and places. The materials are the leftovers created by the capitalist system remade using traditional techniques transposed and reimagined.