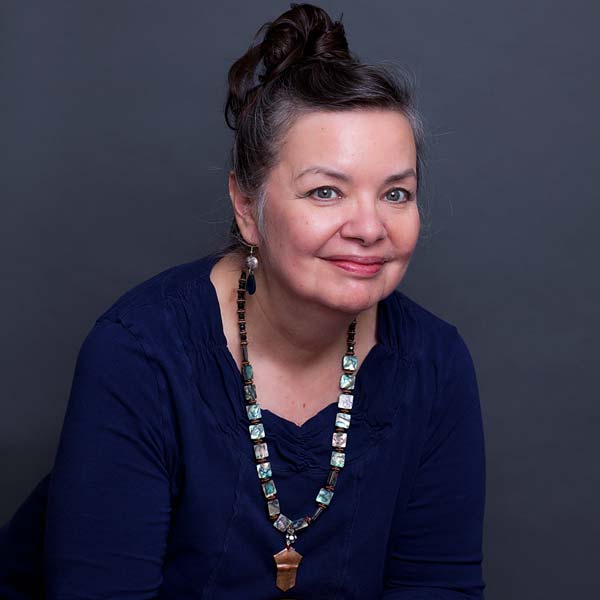 Sharon Jinkerson-Brass is a member of Key First Nation in Saskatchewan. Sharon was part of the “sixties scoop” but she reunited with her family in the 1980’s. Sharon received her cultural teachings from her beloved Anishinaabe grandmother Rebecca, who was a midwife and traditional healer. Sharon’s cultural heritage has inspired all of her art and way of living.

Sharon is an award-winning artist who was the artistic director of “Big Sky” a successful multi-media company that performed in the US and Canada. For 30 years Sharon has also been a community leader working for social change for the Aboriginal Community in the areas of arts, culture, health and community development.

Sharon believes that a relevant, sustainable cultural foundation is the key for wellness for her people and all people. Her path has led her to embrace a harm reduction, low barrier, intersectional collaborative approach to culture, ceremony and community engagement. 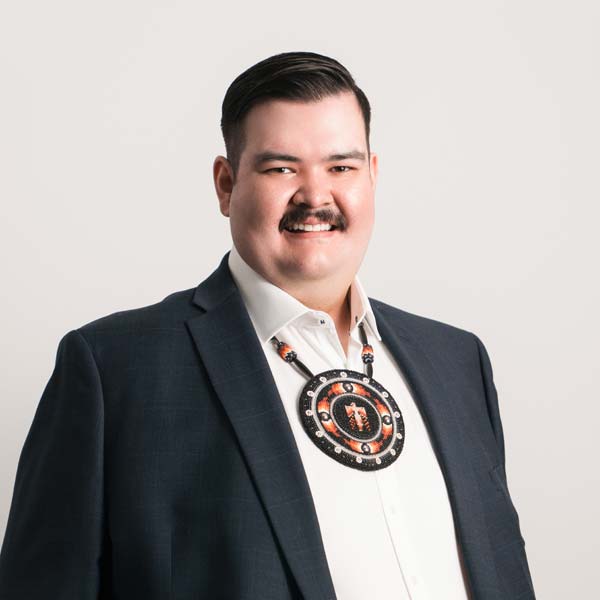 Councillor Solomon Reece-Brass is Tsimpshian, Gitxsaan & Saulteaux and is a member of the Key First Nation. Solomon was elected to the Council of the Key First Nation in June of 2022. In addition to Solomon's Council work, he is the Managing Director of Raven and Thunderbird Group, which offers management and public art consulting. Solomon's work focuses on decolonization, indigenization, economic development, and empowerment.

Solomon is passionate about working with his people and his communities. Solomon has worked in both the public and private sectors and is an experienced leader with a passion for supporting the arts. Solomon splits his time between Saskatchewan and British Columbia. 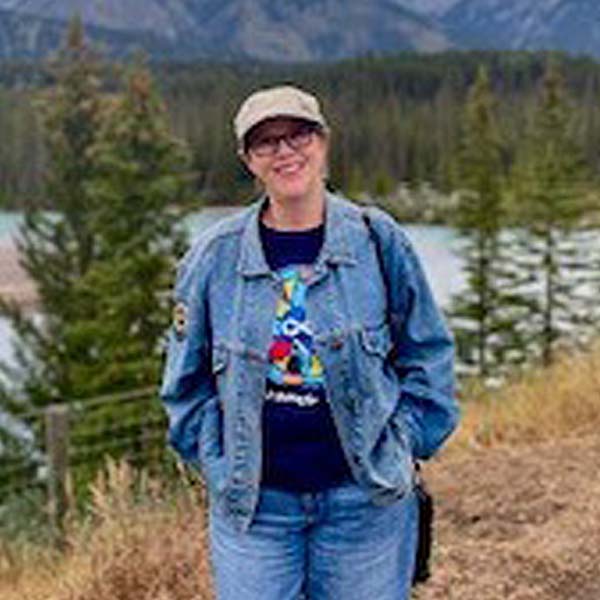 I am 7th Generation Michif on my father’s side from Prince Albert, Saskatchewan with roots in the Red River. My grandmother, Louise Larocque, owned a chicken farm north of town and was a proud Metis. Her barn dances were legendary. My great grandparents were resistance fighters in the 1885 Resistance and the Red River Resistance.

I’ve studied English, Creative Writing and Playwriting at UBC, among other places and was given a place by the Canada Council at The Banff School for Arts and Creativity for Indigenous Writing where I had the honour to be mentored by Tomson Highway and Lee Maracle. I’ve written, illustrated and self-published my own children’s book which was sold successfully in and around Vancouver. I currently have another being shopped around.

For over 10 years I’ve assisted with Metis Night at the Vancouver Friendship Centre and have gone into schools and Colleges to teach our culture, jigging and history. I’m often hired, when professionals are unavailable, to lead dances for Metis Associations at places such as Sechelt, Fort Langley and The Fraser Valley for Indigenous Day and Louis Riel Day. Last year I came in 3rd place at Batoche Days for the Red River Jig! 😊

I am now retired but my working life consisted of 5 years at CBC Radio in Current Affairs, Drama, Serious Music and Variety ending up as the Director of Radio’s Personal Assistant.

Following CBC I entered the Film Industry where I worked for over 20 years on various series and movies as a Production Coordinator on projects such as 21 Jump Street, Neon Rider, Welcome to Paradox, Stargate, The Lizzie Maguire Movie etc. I also was a steward in IATSE 891. When I’d had enough of that industry we opened a retail shop on Commercial Drive which just closed last January.

For three years I worked on the Talking Stick Festival as the Curator for the Metis Fair where I hired talent for dance, music and workshops. I have also been a past President and Board Member for the Metis Dance Group V’ni Dansi. For the past year or so I’ve been one of six to sit on an MNBC Culture & Heritage Working Group, a newly created committee to help guide the staff of the Arts and Culture Department regarding new ideas and initiatives.

I’m a beader, a moccasin maker and attendee at the Nehiyaw Sundance and powwows. I welcome the opportunity to serve my community. 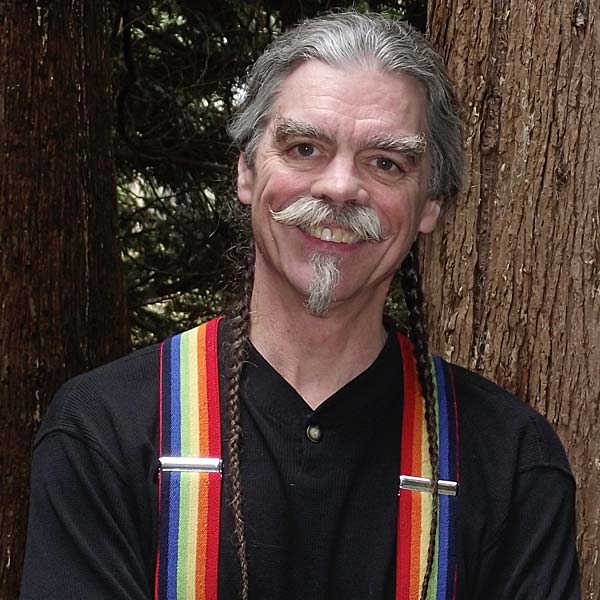 David MacMurray Smith is an independent educator with over 45 years of professional experience in the areas of Theatre, Ballet, Opera, Mime, and Clown. He is a movement specialist and experienced counselor with special interest in exploring how memory moves and patterns itself through our bodies. He was drawn by his experience to develop his own body-centered, humanist approach to personal and professional development through creative studies in the psychology of human performance.

David was Co-Developer, Program Director, and Core Trainer for the Ensemble Training Program of Full Circle First Nations Performance with Margo Kane, Associate Director and Head Instructor at the Vancouver Playhouse Theatre School, Movement Director for the Music Theatre Studio Ensemble and summer Opera Programs at the Banff Centre for the Performing Arts, a Founding Faculty member and instructor in the Expressive Arts Therapy Training Program through Langara College Continuing Education, and 20 years on faculty in the Douglas College Theatre Program.

He is presently Co-Creator, and Director with the award winning James and Jamsey comedy clown duo, and runs his own courses through Fantastic Space Enterprises, which he founded in 1995 to assist in expanding dimensions in self-knowledge, creation, and communication. 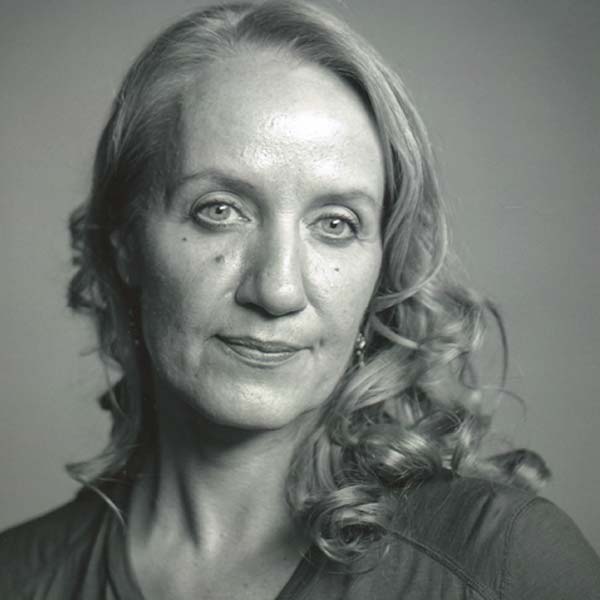 Yvonne Chartrand is a contemporary choreographer and dancer as well as a national award-winning master Métis jigger. In 2000, she co-founded V’ni Dansi (“come and dance” in Michif) where she continues to act as Artistic Director. Yvonne’s Métis dance work was passed to her through many Métis Elders and she is dedicated to preserving traditional Métis dance in Canada. Her contemporary works are always informed by her Métis identity. Yvonne is a winner of the 2011 Victor Martyn Lynch-Staunton Award from the Canada Council for the Arts.